As a direct budget flight from London launches this week, our Brazil correspondent picks out favela feasts, samba sessions and seaside cycle rides to savour.

When Rio introduced a bicycle hire scheme (sponsored by Banco Itaú), the bikes were constantly broken and the system frequently froze. It works much better now, with three-gear bikes available across the city with payment plans as cheap as £3 for three days. Seaside cycle paths lead from the Marina da Glória through the leafy Aterro do Flamengo park, with its joggers, families, picnics, rope walks and samba rehearsals, all the way to Urca, the Sugarloaf and Copacabana beach. From there, the beachfront lane goes on to Ipanema and Leblon. And, on Sundays, half of Rio’s waterfront highway is closed to traffic, making the distinctive orange bikes a quintessentially carioca way to reach the beach. You may need help to register on the Portuguese-only site.
• bikeitau.com.br 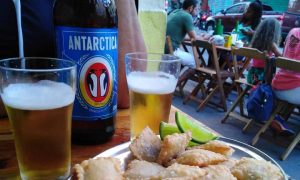 Cariocas, as Rio’s laconic, sociable residents are known, adore street life, eating seafood and hanging out in the no-frills streetside bars and food stalls known as pé sujo – literally, “dirty feet”. Hence the popularity of the two fish bars on a nondescript street on the edges of raucous nightlife neighbourhood Lapa, where cars pass perilously close to the chairs and tables spilling over the pavement as all human life wanders by, and the beers are always ice-cold. Both Bar do Peixe and Bar Peixe e Cia serve delicious leão veloso seafood soup (£2.50) and enormous plates of fried fish, rice, salad and pirão, a sort of thickened fish gravy, for two that would feed a small family (around £10).
• Bar do Peixe, Rua André Cavalcanti 16b, Lapa, open Mon-Sat 11am-midnight, Sun 11am-10pm. Bar Peixe e Cia is next door and a bit cheaper 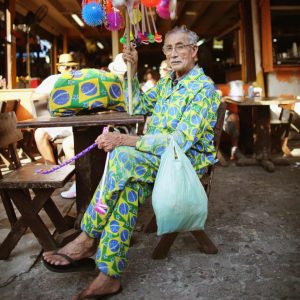 In a concrete stadium a 10-minute taxi ride from São Cristóvão station, the Feira de São Cristóvão is a gloriously trashy smörgåsbord of food, music and goods from Brazil’s north-east. On a recent Friday, a man in a leopard-print vest sang north-eastern pop to a keyboard accompaniment, while children played football, but the fair also hosts major artists. Traditional north-eastern dishes like sun-dried beef (carne de sol) and mocotó, a rich and fatty meat soup, dominate the menus. Pink and blue cans of Guaraná Jesus – a sickly, pink fizzy drink – are sold next to slabs of gorgeous rapadura, a sweet made of raw sugar cane, and folk memorabilia. Cariocas also like to cram into one of the karaoke stalls for a rowdy night of singalongs.
• Campo de São Cristóvão, feiradesaocristovao.org.br, open Tue-Thur 10am-6pm, free; Fri 10am-6am, Sat 10am-6am, Sun 10am-8pm, £2 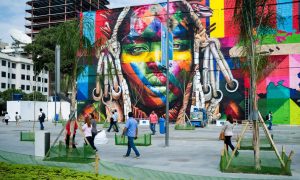 There wasn’t much of a legacy from the 2016 Rio Olympics, but the city got one thing right when it revitalised a decaying port area and replaced an ugly flyover with a spacious, pedestrianised square called Praça Mauá. Stroll there along Orla Conde (AKA Boulevard Olímpico), the quiet, waterside route from historic Praça XV, where ferries to Niterói dock, passing a naval college and views of colonial Ilha Fiscal. With its street performers and food trucks, the square has a peaceful, family atmosphere. Huge graffiti artworks dominate a wide, pedestrianised avenue of warehouses off it. The futuristic Museu do Amanhã (Museum of Tomorrow) on the waterside, is a visually stunning concrete bromeliad, but its interactive scientific displays are probably not worth the hours of queuing. 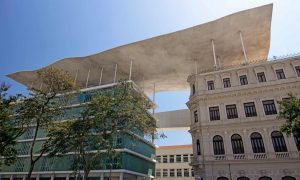 The six-year-old MAR (Museu de Arte do Rio) is a much smarter option. Visitors enter a former bus station, head up to the roof with its magnificent views across the city, then descend into the colonial mansion beside it. There’s a permanent exhibition of historic paintings and photographs of Rio landmarks, while temporary exhibitions are challenging and expertly curated, often focusing on Brazilian contemporary art tackling prickly themes such as poverty, injustice and the slave trade that for centuries blighted this port.
• Praça Mauá 5, museudeartedorio.org.br. Closed Mondays. Free on open Tue-Sun 10am-5pm, free on Tue, adult £4, concessions £2 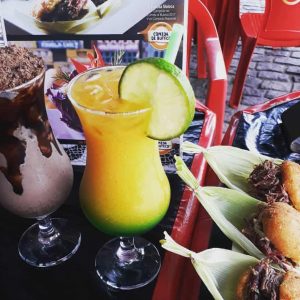 Halfway up a hill at the beginning of the Chapéu Mangueira favela and not far from Leme beach, Bar do David is one of Rio’s favourite restaurants because it has everything cariocas want: the food is excellent, the host is friendly and the late-afternoon atmosphere is relaxed and informal, with plastic chairs and tables on the street. The seafood bean stew (feijoada de frutos de mar, £16.50 for two) is its trademark dish, but there’s also carioquinha – a dish of beans, sausage, rice and cabbage (£6), plus prize-winning starters, such as seafood croquettes, and artisan beers.
• Ladeira Ary Barroso 66, Loja 03, Leme, open Tue-Sun 10am-10pm

Held on Sundays, from early morning to mid-afternoon, the Feira da Glória is the biggest street market in Rio’s Zona Sul – or South Zone – and it fills the colourful neighbourhood of Glória with noise, food and life. As you amble through the jumble of people, stallholders bellow about their wares, a man called the King of Shit sells manure, and live musicians play sweet chorinho music in an adjacent square. It’s not just a Sunday morning routine for many cariocas, it’s also the cheapest way to buy fruit, vegetables, spices, artisan cheese, household implements – even live crabs. And if snacking on tasty, deep-fried pasties and alarmingly sweet sugar cane juice isn’t enough, buy some fresh fish, head to the end of the market and pavement restaurant Damasio’s Galeteria will cook it for £3 while you enjoy the live samba combo in the bar next door.
• Damasio’s Galetaria, Av Augusto Severo 220, +55 21 2221 1125, Sun 8am-2pm, busiest late morning 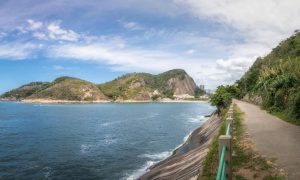 Languidly strolling down the Cláudio Coutinho trail, it’s hard to believe you are on the edge of a metropolis of more than six million people. The paved path hugs the forested base of the Urca hill and Sugarloaf mountain, offering spectacular views of the bay beneath. With cycling and skateboards banned, the noisiest thing in earshot is the chattering monkeys – which visitors are asked not to feed. Leading off to the left near its beginning is a steep, 45-minute hike up through the trees to the cable car point on top of Morro da Urca. From there, you can jump on the cable car to the top of Sugar Loaf, or ride it back down.
• Praça General Tiburcio, 125, Urca, daily 6am-6pm, free, visit.rio 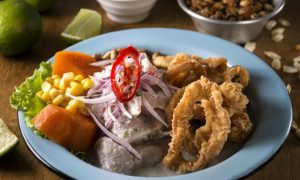 Botafogo used to be a busy, grey neighbourhood known for bad traffic and cheap rents. But in recent years, it’s become Rio’s Hoxton as new bars, clubs and restaurants have mushroomed and brought a contemporary aesthetic to a city that for years repeated the same old gastronomic formula. Ceviche RJ is a Botafogo favourite, a pavement cafe serving excellent Peruvian food, such as its signature ceviche (£5.50) and delicious chicharrónes with fish and squid (£7.50). There are artisan beers as well as cheaper brands to wash it down and an excellent salsa soundtrack. Plus it’s walking distance from Comuna, a hamburger restaurant and bar with DJs and a young, hipster crowd.
• Rua Arnaldo Quintela 66b, Botafogo, Weds-Fri noon-11.45pm, Sat 1pm-midnight, Sun 1pm-11pm 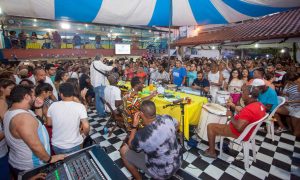 t’s a hike out to Andaraí for this Monday, late afternoon/early evening samba session at the Renascença Club, but it’s worth it for the music, the atmosphere and the acarajé, a spicy bean burger with prawns from the state of Bahia (£3). This is a traditional samba da roda, in which the crowd gathers around musicians seated at a long table to dance and sing along. At Monday’s traditional workers’ samba or Samba do Trabalhador, Moacyr Luz, a great samba composer, leads a group who play with precision, panache and passion to a crowd who buy metal buckets full of iced beers in a big, white-painted yard.
• Renascença Club, Rua Barão de São Francisco 54, Andaraí, renascencaclube.com, Mon 4pm-9.30pm, £4

Getting there
Norwegian has this week launched direct flights from Gatwick to Rio from £170 one-way or £340 return.

Where to stay
Acommodation in Rio isn’t cheap, particularly near its famous beaches. A stylish exception is the Best Western Premier Arpoador Fashion Hotel (doubles from £75 B&B, website in Portuguese) between Copacabana and Ipanema. Vila Galé Rio de Janeiro in Lapa (great for nightlife but take a taxi) is also a good deal, with rooms from £60 B&B and there’s a lovely swimming pool. Thebrokebackpacker.com recently published a useful list of 20 “amazing hostels in Rio”.

When to go
Summer in Rio (December-March) is scorching, with temperatures as high as 40C, but it’s a fun time to be here, with the city gearing up for carnival (21-26 February 2020), with streets parades and parties. Even winter (June-August) is a good time to visit – as warm and pleasant as a London summer.

Published by ” The Guardian “