Street Parties, Samba Parades and Flashy Carnival Balls – Enjoy all That and More at Rio Carnival 2020

As the Rio Carnival 2020 approaches, excitement builds up. The yearly party celebrated in real Brazilian style, continues until Ash Wednesday, which also marks the beginning of the Lent period, characterized by abstinence from worldly pleasures and fasting for Christians around the globe. The Rio carnival attracts approximately a million people from different parts of the globe to this city, where they can enjoy the pulsating sounds of the Samba.

An Insight into Carnival history

The word Carnival originates from the Portuguese ‘Carne Vale’, interpreted as ‘Farewell to meat’.
The phrase refers to the Carnival as being the ultimate celebration before a period of abstinence from alcohol, meat and pleasure begins. This period lasts up to the Easter holiday, the date when Jesus Christ rose from the dead. Lent is normally observed for 40 days. The Rio celebration begins just a week before Ash Wednesday and parties begin in December.

Influenced by European and African Traditions

The first Carnival was organized during the 1640s. During that time, elaborate feasts were organized to give honor to the Greek wine gods. Drinking sprees were common and the Romans organized parties to give honor to Saturnalia and Bacchus. Soldiers exchanged their outfits with others to indulge in nocturnal festivities of wildness and revelry.

The Roman Catholic Church put in place the traditions of the current Carnival celebration that leads to Ash Wednesday, the beginning of the Lent period in the Christian calendar. The festival ‘Entrudo’ was introduced by the Portuguese and this inspired the birth of the Carnival in Brazil. In 1840, the very first Rio masquerade took place, and polka and waltz took center stage.

The Africans have subsequently influenced the Carnival with the introduction of samba music in 1917. Samba is now considered as traditional Brazilian music, and you can experience its rhythm at the Rio Carnival 2020.

Samba, the Heart of the Festival

Ancient Carnival traditions in Italy consisted of several masquerade balls with revelers dressed up in costumes, but Brazilian traditions were influenced by the Portuguese and African presence in South America.

The Rio Carnival has a unique style, which is mainly attributed to the influence of African immigrant slaves, famous for their spectacular musical abilities. African slaves, brought to Brazil by the Portuguese, gave life to the first samba rhythms.

Carnival costumes were made of various elements, such as feathers, grass and bones. The Rio Carnival 2020 will give you a glimpse of the past as well as the future.

Revelry all over the Rio’s streets

Sometime during the 19th century Rio’s neighborhoods began to take part in the carnival parades, with cordoes, or samba-led groups of people, accompanied by percussionists, drummers and other musicians. Dancing, singing, excitement and party spirit- you could find all that and more on the streets of Rio, until the Carnival turned into a competitive arena for various blocos, or street parades. Today, participants are extravagantly dressed in their bright costumes as they strive to become the champions of the carnival.

You can become a reveler at Rio Carnival 2020 and follow popular blocos as they liven up the atmosphere of their neighborhoods.

Samba music at street parades influenced the emergence of samba schools in Rio.
Today, these schools are positioned at the very heart of the carnival celebrations. As competition among street bands increased, samba schools created a specific identity so they could stand out from the crowd.

The name of the oldest and most famous samba school is Mangueira, which dates back to 1928. This school promises to present a fascinating show at the Rio Carnival 2020 at one of the many stunning Carnival Balls, hosted at the Scala night club. The best samba schools like Salgueiro, Mocidade, Grande Rio, and Beija Flor usually follow the example of Mangueira. You can sit back and enjoy their performances at the Sambadromo, a stadium constructed in 1984, which will host numerous spectators at the Rio Carnival. 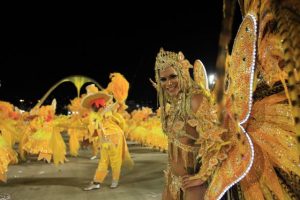 The Carnival became a competing arena for Samba Schools in the mid 1900s, when their popularity increased. Street parades grew bigger and more dynamic with the appearance of samba schools, which subsequently led to the need to build a stadium. The spirit of competition required a powerful arena for presentation, and soon the Sambadromo was constructed in 1984, a product of the design work of prominent architect, Oscar Niemeyer. Since then, the stadium has been modified with ideas from numerous immigrants, who have contributed to its unique architecture, in their own way.

The goal of the samba parade is to give samba schools the chance to demonstrate all their talents. They need to choose a Carnival theme and compose a song, which will beautifully reflect its meaning. The theme is mainly expressed through dance and music.

For the Rio Carnival, samba school members, accompanied by passionate samba dancers, in their fantastic and often provocative costumes, will allure everyone into joining the feasts.

They are joined by a number of choreographers, who have invested tremendous efforts in preparing costumes and floats.

Every school has eighty minutes to demonstrate their skills and convince the judges of their talents. Brazilian celebrities come to support their favorite samba schools and the locals and tourist come to witness this unique and spectacular event, also defined as ‘the biggest party on the planet.’ All the Samba Schools compete for the elusive Championship title and their fate lies in the hands of 40 judges who grant points based on element such as costumes, samba song and theme.

To experience this magic at Rio Carnival 2020 buy your tickets much in advance.

The Week of Carnival – Limitless Feasts

The crowning of King Momo, under the initiative of the Rio de Janeiro’s mayor, will launch the Rio Carnival. The event opens the door to numerous celebrations such as Carnival balls and street parades in Rio, where you can fully sense the Carnival spirit.

The party spirit predominates almost every city corner. These street parades don’t come at a price as they are absolutely free, and locals are happy to welcome tourists to take part in the celebrations. Events like the Magic Ball at the Copa and Scala Rio Balls are preferred by the rich and the famous from all around the world. The Rio Carnival 2020 is with no limits, no taboos or social boundaries.

A never-ending party where the fun never ends.

Competitions at the Sambadrome

The Sambadrome, located at Marquês de Sapucaí Avenue is the focus of attention during the Rio Carnival.
The sophisticated Samba Parade is the focal point of all competing samba schools, trying to win the coveted championship title. Schools present spectacular shows on a daily basis, and Rio Carnival will be surely be even more exciting than before. The Access or Gold Group samba schools each compete to win a spot among the next year’s best 13 schools.

The schools will definitely present a stunning show, as each of them try to conquer the judges’ hearts. The peak of the events culminate on Carnival Sunday or Monday, when the top 13 samba schools compete, while maintaining the camaraderie mood. 6 schools will present a spectacular show, with the hope of grabbing the judges’ attention.

Ash Wednesday is the day when results are announced, and the best six schools make their ultimate performance next Saturday.

The Rio Carnival 2020 will give you the remarkable opportunity to attend some of the most thrilling City carnival balls.

The party is never ending, and many balls have been transmitted on TV nationwide. The upscale crowds usually head out to the Magic Ball at the Copacabana Palace Hotel. Ball tickets are a hot item, as they offer a rare form of refined entertainment.

The Rio Scala Nightclub is the home to many Carnival balls such as the Scala Gay Ball, one of the Carnival’s most spectacular events, providing the opportunity to see drag queens from various places around the world, in their most fabulous outfits, partying harder than ever.

Street parties in Rio start weeks before the Carnival and are characterized by loud music. Every night gives life to more than 300 different parties, attracting cariocas and tourists. The Rio Carnival will provide you with the incredible chance to observe the most sophisticated samba groups with their spectacular floats and a number of revelers in their outrageous outfits.

Travel Preparations for the Carnival

Tickets for the Rio Carnival 2020 sell very quickly, so you need to purchase them in advance. Reserve your Sambadromo tickets early so that you can get the best seating options.

By joining a samba school at the Sambadromo, you’ll enjoy the true spirit of the carnival. As the schools allow people to join their fervor and take part in the parade you’ll feel just like one of the many dancers.